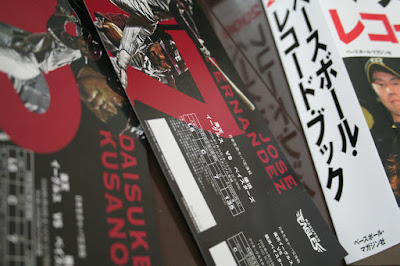 I'll be going to the inter-league game between the Eagles and Stars tomorrow afternoon. Unfortunately, the forecast calls for rain showers to develop in the PM. I've never really been much of a fan of watching baseball in the rain, although I suppose it can sometimes make things a little interesting.

I think the current rotation includes Iwakuma, Guzman, Tanaka, Nagai, Asai, and Ichiba. Hasebe was recently activated from the DL and my guess is that he will slide into the rotation as he regains his arm strength. He was slated to start last Wednesday against the Orix Buffaloes, but that game was rained out. He ended up making a relief appearance in the following game and then made another appearance in relief on the 21st against the Dragons.

So far, in looking at the month of May, Tanaka has pitched every Sunday and Nagai every Tuesday. It looks like Asai has gone every Wednesday and Iwakuma every Friday. In the two games that have taken place on Saturday this month, Guzman has started both so my guess is that he will be starting tomorrow.

I plan on bringing my camera to the game, but if the weather isn't good, I may end up leaving it behind. Here's to hoping that the weather can at least hold until after the game.